Where have I been you ask?  Go down the dark and twisty road...turn left at the skull and cross bones, take the bridge over the River of the Dead, peek over the sign that says Zombie Land and look for the old lady hacking up a lung.  Yep, that's me.  This cold is like the Energizer Bunny...just keeps going and going and going.  I started back to work last week, but it was tough.  I slept MOST of last weekend. Monday was tough, Tuesday was a pain, and today...well, I am still tired but functioning.

I have a few things to show.  First, I finished my stepson's red and black blanket.  I think it turned out nice and he was thrilled when I sent it as part of his Valentine's gift. 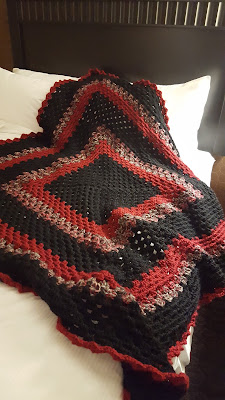 Then, with all the time at the hospital with Baby Sister, I started a new blanket.  Nothing special, but I liked the colors.  I was thinking of starting a knitting project, but it was much easier to haul around one crochet hook and one skein of yarn.  LOL  One less thing to lose. 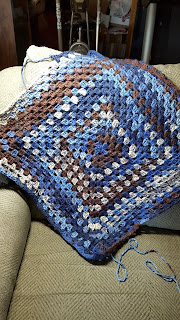 Got home, spent the next week sleeping and then started a knitted scarf for my son.  It is a simple knit and purl, but I love,love, love the Merino wool and it is turning out so pretty!  I bought a new pair of bamboo needles.  I really like the quiet of these needles and it just seems to work better with the wool.  It sounds weird, but working with natural products makes me feel more grounded to the world. I know, weird.  LOL 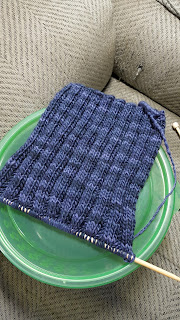 Update on Baby Sister...she is doing great!!  Learning how to eat to fit the surgery and healing well. She feels that it was worth it.  With the cold that I caught, I am still thinking about it.  LOL  This is about all I can handle tonight...I am off to shower and then fall into bed.

Be kind to one another.

My Sister's Hospital Adventure and Then...

Good evening from the rancho...I know that everyone has been waiting with baited breath to find out just what I did on my trip to LA.

First, my baby sister and I both survived.  Barely.

We started south on Wednesday afternoon, with the plan that her surgery would be at 2 pm the next day. Over the course of our four hour drive, her appointment was changed first to 11 am, then to 5 am. Really? It's like they just spun a wheel every two hours...whoo hoo...new surgery time for YOU!

Up the next morning at 3:30 am to make it to the hospital at time.  All seemed well, though Baby Sis never saw her surgeon before her surgery.  We were assured that he would see her AFTER the surgery.  Nope! It was to have been a three hour surgery.  Nope, five hours.  I saw her at 6 am in pre-op and then not again until 6 pm.  Long day.  She was in a semi-private room, but had to be moved within an hour.  The woman in the next bed was well-loved by her family. I got that.  But all 10 of them at the same time? Including take-out and music?  Not much rest going on over on Baby Sister's side.  She was moved to a private room.  We thought our troubles were over.

Between slow response time and lack of cleaning, I was seriously concerned for her health.  We didn't realize that the hospital was privately owned, but just used by USC as a teaching hospital. They have a whole lot of teaching to do!  The floor was completely understaffed, so much so that when my sister's drains over-flowed (after calling them and saying it was time to empty them!) I was the one that cleaned the floor and changed my sister's gown.  And that was only the first time.  They had her shower alone, walk alone, eat alone.  Her trash didn't get changed for days, floors were filthy. The day after we left, the care staff went on strike.  Why? Under staffing!!  No kidding.

Originally, it was a two day stay, then a four day stay.  Baby Sis was starting to feel better by Saturday, but they kept saying just one more day, just one more day.  By Sunday, I was feeling run down and crappy.  Would spend 8 to 10 hours at the hospital and then sleep for 12 hours.  I realized by Tuesday morning, I was not well and getting dehydrated. Spent all of Tuesday morning, drinking lots and lots and lots of fluids.  You guess it...that's the day she got released!! In the car and started on the four hour drive home.  All went well, but as soon as we got home it was straight to bed for both of us.

I got up the next morning, checked on Dad (from a distance, hubby was still taking care of him since I was feeling yucky), checked on Sis, and sat down in a chair.  Two hours later, go up to get some water since I had had no food or liquids for 16 hours.  It was really weird, my vision got blurry, I got really nauseous, everything was sparkly...next thing I know, I am laying on the kitchen floor.  Wow, so nice and cool...until I realized that the water I thought I laying in was really blood where I had hit my head on the floor...And the only other people home?  Baby Sis and Dad. After Dad's caregiver came in, Baby Sis drove me to the hospital.  She decided she was feeling yucky, too, so it was a win-win.  LOL  I had ER Room 27, she had ER Room 15.  It was good that she went in, bladder infection. What a surprise!!  Everyone knows that it is most likely that you will get a bladder infection after a catheter.  Did the first hospital check before she left?  Nope!  She got sent home with antibiotics and a clean bill of health.  Pretty funny since she had just had a major surgery six days before.  LOL

As for me, after six hours, a chest xray and a CAT scan, I was sent home.  My diagnosis?  Probably started as a mild virus, but then, not enough food, not enough liquid, too much stress.  LOL  LOL  LOL What a surprise...

So, I have spent until this afternoon, moving from couch, to chair, to bed.  Nothing more.  Hubby is still taking care of Dad, I won't even get close until I'm sure I am not contagious.  I'm sure that they were right, I picked up a virus, either at the hospital or the hotel.  Doesn't really matter, as usual, I kept going a hundred miles an hour until I crashed and burned.

It was a tough week.  LOL  I did a little crocheting...finished my stepson's blanket and started another.  Pictures next time.

Be kind to one another.
Posted by Angela Tucker at 5:36 PM 14 comments:

I am with my Baby Sister in Los Angeles.   She is having a planned surgery tomorrow morning at 7 am. I  didn't want anyone to think that I had left the country.  LOL.  I  will  check in when we get back. Be kind to one another.

And I am amazed  that I  figured out how to do this with my smartphone.   Usually  it's  smarter than me. LOL
Posted by Angela Tucker at 8:15 PM 6 comments: