Worked most of yesterday and late in to the night, but I got it done! Baby Quilt One out of the way, and early, too! Here is a picture of the front. Had thought to do a fence rail, but after I got started, realized that the large strips showcased the animal pattern much better. 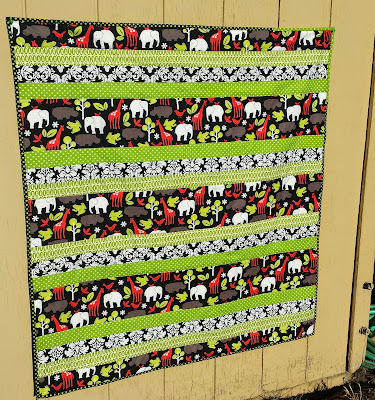 Then found some really nice black/white pattern for the back. I had planned on using some of the green patterns from the front, but made the quilt just a little larger than I should...not enough fabric! 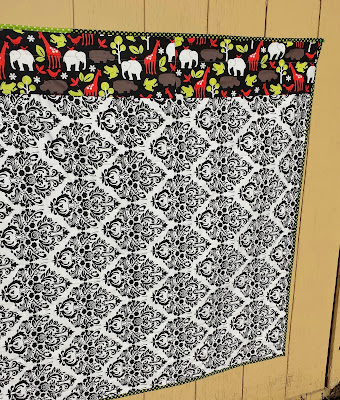 And anyway, I love, love, love pieced backs! Then on to the binding. 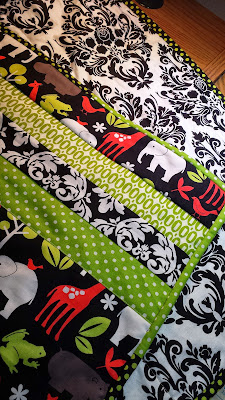 If you look closely, you will see my signature two-fabric binding. Green with black dots, kiwi with white dots. My favorite way to do binding!

I will start on the next baby quilt today. A little more difficult, this family doesn't want to know if it is a boy or a girl, so I will need to be creative! Maybe a nice pinwheel in prairie colors? I don't really know about using a child print...hard if you're not sure boy...or girl...

In other news, sent some real glass glasses and kitchen towels to my son. I am pretty sure that he moved with only one or two. He kept saying that he would pick up some household stuff after he got settled. I think I paid more to ship the stuff than I did to buy it! Then, JCPenney had a great sale on towels, plus I had a $10 coupon. You know I had to pick up a couple of sets! LOL And for just $8, they do the shipping. I miss him so much, but he's been really good about calling the past couple of weeks.

My dad is starting to go downhill. Our Hospice nurse heard some congestion in his lungs this week. It may be nothing, or may be the beginning of the end. I was very sad the first couple of days after the news, but I know in my heart that he can't last forever...the whole point of Hospice is about coming to the end of life. I need to put my big girl panties on and just take care of stuff. Just the same as I have the past year.

Off to look at my fabric stash, there has to be SOMETHING in that pile that I can use. Watch over your loved ones, be kind to one another.
Posted by Angela Tucker at 3:11 PM No comments:

Here is a little peek at the almost finished quilt top. 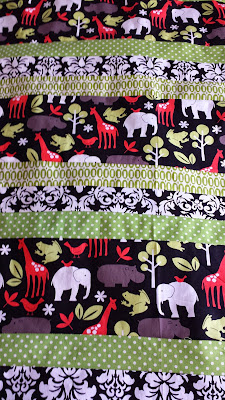 I still need to work on the back. I under estimated the amount needed, so will need to pick up another 2 yards of something that matches. I like to piece my backs, so I will use a small piece from the black fabric to tie it in. The strips are not as crooked as the picture shows. LOL I just take really bad pictures. LOL
Done sharing, off to finish the laundry. Be kind to one another.
Posted by Angela Tucker at 6:51 PM No comments:

A Finish and a Start!

Just a quick post to show my finish of The Black and the Red I by Prairie Moon. Of course, there is no red, but you get the idea. LOL 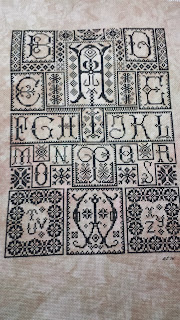 I used Carrie's Creations silk, so easy to work with...doesn't snag or knot.

I started on a baby quilt for a co-worker. I have two quilts to finish before November, so need to get my behind in gear! I will show my start on the next post. All I have done is cut the strips for the rail fence, I will be working on the plain squares today. This will be the second child for both co-workers. I am very excited, they are going to be great dads! Off to get some cutting done. Be kind to one another.
Posted by Angela Tucker at 12:56 PM No comments:

So, last June, I had decided to work a current UFO to a WIP to a completion. Did really well for a couple of days, then life got in the way. But, as of this morning, I am showing some progress! Had plans for yesterday. A trip into town, maybe some dollar store shopping. I got all my chores done, took my shower, put on some make-up, and came to a complete stop. It was just too much trouble to get in the car. Not sure why, maybe just my crappy mood. So, off to plop my behind on the couch and work a bit on my project. Really close now, only about six more motifs and a few letters. 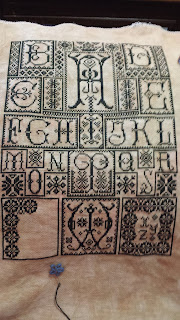 It will be nice to have this done. Unfinished projects have a way of creating guilt. I think of the time and money already invested... Since the spare bedroom was tidied up when my sister stayed with us, I've got some empty walls to fill! I rummaged around in my finished bin, and found a few samplers that need framing. I'll be watching the Michael's sales papers, they have some nice frames, but better to get them at half price! LOL Time for my day to start. Be kind to one another.
Posted by Angela Tucker at 7:25 AM No comments:

Been a tough week. Not a lot of chatting going on at our house. I mind my own business, don't get sucked into anyone's drama. My sister moved in last week, but just for a couple a weeks, waiting for her townhouse to be ready for move-in. We did one "sister day", had a good time, an amazing lunch. I don't really have any girlie-girl friends, so it was nice to be out for the day. I did have one very bright spot. My cousin came over, said she had something for me. Pulled out this amazing picture. 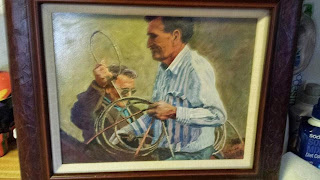 It seems that she was at an art show a couple of years ago. A friend came up and said that there was a picture of her dad and uncle up for sale. She went over to take a look. Yep, it was the brothers! She scooped it up and took it home. She has gifted it to me. I then surprised her by showing her all the photos we had from the same round-up! It seems that about 10 years ago, my family and her dad had been at a round-up. We were taking pictures, but, so was a friend of a friend that just happened to be an artist. Five years later, she paints a picture of "Brothers". It goes to an art show, and ends up purchased by the perfect family. I am so very grateful to my cousin for this gift. My dad is the one in the glasses. It reminds me of happier days. She will be copying all the pictures I gave her and we plan to meet for some sharing of other photos and family information. Perfect! Off to get my day started. Be kind to one another.
Posted by Angela Tucker at 7:09 AM No comments: