I did the grocery shopping this morning. My Smart and Final store has a large area of bins. Now, some people don't care for bins, there being terrorists, messy children and such. But I work in a prison, I'm pretty much used to germs and taking chances. One of my favorite candies, Jelly Belly (jelly beans) are offered at $6.99 a pound for mixed. That is a bit much, but if you buy the flavors separate in a candy store, you pay about $9.00. So of course, I pick up a (few) pounds. 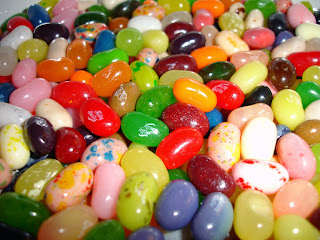 If you look very closely, you will see a slightly mottled yellow bean. It is most likely a buttered popcorn bean. Oh my goodness! That flavor is the nastiest, grossest, yuckiest, and did I say nastiest flavor that could have ever been produced. I will eat every flavor, even the weird, fruit-flavored insecticide flavors that are supposed to be raspberry or blueberry. But buttered popcorn? Who the hell thought of that flavor? Seriously, if I wanted popcorn, wouldn't I just make some? So, as I am on my way home, I accidently-on-purpose open my special bag of goodies. And what is the first flavor I find in my hand? Of course, buttered popcorn! It was all I could do to not open the window and throw it out. But, I don't like to litter and I don't want to kill the birds. So back in the bag it went. I will admit that as soon as I got home, I picked through that bag of jellies and picked out every popcorn flavored bean I could find. Hello Mr. Trashcan. I do not like to throw away good food, but for those, I will make an exception. I know, small problem in large world, but I just had to. I suppose that it is God's way of telling me to lay off the sugar, but I ignoring that and just taking the extra time to find and destroy those babies. And this time, I hope I was victorious. Last time I missed a few and suffered later. LOL Have a great day and be kind to one another.
Posted by Angela Tucker at 10:49 AM