Life at the Speed of Light...Or...Zoom-Zoom

I completely misplaced about a week and a half.  I remember doing yard work, cleaning house, going to the chiropractor, and then things get really fuzzy!! I opened my eyes on a Monday, went to bed that night, the next day was Friday.  Zoom-zoom...LOL

Completed my first two weeks of hip and spine adjustments.  My bones and muscles are feeling pretty good.  No pain, so I think this may work.  LOL  I feel a little like I'm in training for a beauty pageant....stand up straight, no slouching, tuck in that chin, keep your stomach sucked in, shoulders back and square...Someone asked if I was losing weight...nope, just moving it around and I've got better posture. LOL

Finished my roses just in time for the next rain.  Of course, had a little accident.  While minding my own business, a rose bush reached out and grabbed my jeans, and I took a little tumble.  I was worried that I had hurt my hips again, but all was fine!  My neck was a little tight, but no damage. Either I'm getting better at falling, or I'm getting tougher when I do fall.  LOL

I participated in my promotional interview on January 26th.  Still no news one way or the other.  The other assistant food manager (she did not interview) went up to see if a choice had been made.  She was told that the form had been submitted for hiring, but was incorrect, so needed to be redone.  I won't ask since I do not want to be accused of trying to promote myself.  Sigh...  The waiting is making me tired.

I've been working on the baby blanket, but really need to get this finished!!  My goal was the last day of January, but that was part of the week that I lost.  Supposedly, three skeins of yarn would be enough. Hmmm...nope.  So, I picked up a contrasting color for a few double crochet rows and a shell to finish it off. I HAVE TO GET THIS DONE!! 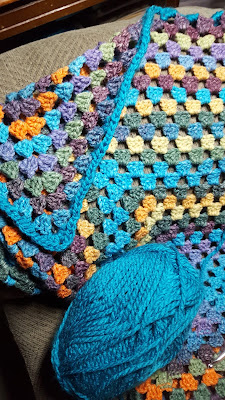 Here is a picture taken last week while we were waiting for the next storm to move in...I love the way that the silver clouds look against the blue sky.  SMILE 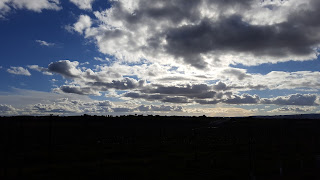 I checked my rain gauge.  Another three inches.  It's still coming down perfectly...one or two inches a day, soaking in, no flooding.  My husband and a neighbor worked on the road yesterday.  It is a dirt/base road and was starting to get a lot of pot holes.  They put in EIGHT truck loads of base and got it spread before the worst of the rain.  It is supposed to be dry today, so if they do a couple of passes with the tractors, it will be really nice.  We have a road fund and managed to collect quite a bit of money this year, so were able to buy the extra road base.  This should hold us for a couple of years.

On the Dad front...my uncle and cousin came to see my dad last weekend.  It was hard for my uncle. He looks at Dad, his baby brother, and you can see that his heart is breaking.  Dad is not able to communicate, but I know that he recognized both of their voices.  He had his eyes open all the time that they were here and was awake for another hour after they left.  My uncle hasn't been to visit for about a year, it is just too hard for him.  But, I am so glad he came, even if it is the final time.  I talked to my uncle last night and told him that I know that Dad is in there and that he knew them.  It seemed to soothe him a bit.  We are almost at the four year mark for Hospice. Wow...never thought that this journey would be so long and twisting. Some days are hard, some are harder, but we will do what needs to be done until the end.  Sigh.

Off to start my day.  I am having coffee with a dear friend this morning.  It has been quite a while, so we have a lot to catch up with.

Have a wonderful weekend, be kind to one another.

Posted by Angela Tucker at 5:39 AM