Rain, Rain, and More Rain...And an Afternoon Off

Good morning from soggy California!   This is a quick "what I've got going on" post.  LOL

The rain keeps coming and coming and coming.  We had four inches in two days with another storm moving in tonight.  We are fortunate here in Central California.  A few areas have flooded, some road closures, and a 12 hour black-out on Friday.  Nothing too scary.  I was more concerned about the lack of electricity than anything else.  My dad's bed has a special mattress that fills with air to keep away bedsores.  We are lucky that we have a generator for emergencies.  No lights, but we kept Dad's bed going.

I've been working on a new scarf.  It will be a gift for a friend of my husband.  After I took the picture, I realized that it looks like a Brach's Neapolitan candy.  It's not really as crooked as it looks. I took a picture of my cross stitch, but somehow got a horrible shadow and am too embarrassed to post it.  LOL 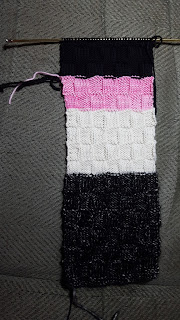 My little fishies have been very busy.  After looking closely, it appears that I have more on the way. Lots of chubby moms in there. 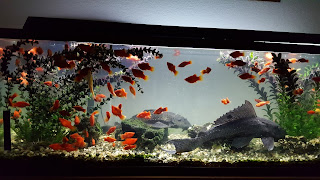 My poor neglected orchids have once again rewarded me with blooms.  I've had this orchid for at least three years, first time that it's re-bloomed.  LOL 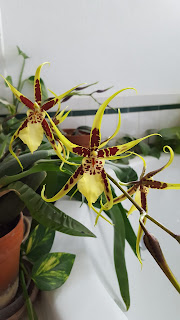 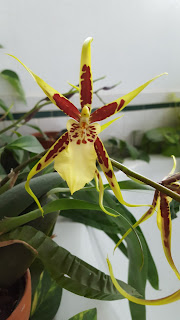 I'm trying to root some geraniums from the patio.  I don't see any roots, but it's been a week and they are still alive. 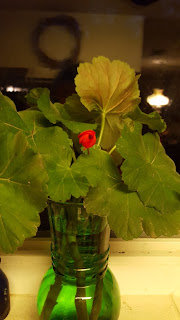 I'm busy, busy at work.  I'm still doing two jobs, but hopefully we can get someone hired in the next month. I talked to my boss last week and asked if I can keep my hours the same.  It is hard to get going at 4 am, but it gets me home before 3:30 pm, so I can take care of Dad.  She agreed, as long as the department doesn't suffer.  My cohort doesn't mind covering for me, so it will work.  LOL

Dad is exactly the same.  Sigh.  I am trying to stay upbeat, but some days make me so tired.  My sister called out of the blue yesterday and asked if we wanted the afternoon off.  Hmmmm...YES. Since hubby promised me a special date to celebrate my promotion, we've planned a drive and an early dinner.  It will be a nice break.  The rain isn't supposed to hit until later this evening, so it should be a nice afternoon.

I am off to get beautiful!  Not really, but I should get out of my jammies and brush my hair.  LOL Have an amazing Sunday.  Be kind to one another.

Posted by Angela Tucker at 8:57 AM