Only three days to Christmas, or so I've heard. I can't even remember what day it is, so I supposed that I shouldn't be making any assumptions about Christmas. LOL Picked up DH's gift. He is really hard to buy for when it comes to Christmas. If he wants it, he buys it. I chose something that he's talked about several times, but he kept saying he would make do with what he had. He didn't want to spend the money. Lucky me, it was $30 off and I had a 20% off coupon. Did pretty well if I do say so myself.

Dad is doing okay. He has had several strokes these past few years and has very limited movement in his left arm. His hand has closed on itself and we keep a washrag in his hand. This is so he doesn't cut the palm of his hand with his fingernails. Unfortunately, the rag must have been a little rough and now we have a really ugly sore on his thumb. We have been so careful to keep his skin clean and dry. I feel bad when I change the gauze, I know it hurts. It isn't as bad as it was yesterday, but I am still checking it a couple of times a day. The nurse will be in tomorrow or Wednesday, so at least I will have a professional taking a peek.

Finished my leaves project. I don't know, I just don't like how these beads lay....I'm a little disappointed, but I guess I will get better. On top of that, I really didn't like how the wool wrapped over the edge. It started to fray and I ended up having to put a few dots of glue to hold it down. I can see where the glue went. Either I did it wrong, used the wrong glue, or used too much glue. Again, very unhappy with my finish. 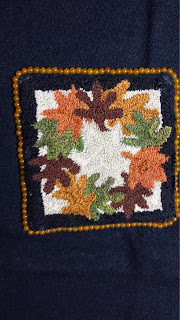 Something I did do right was FUDGE! I never make just plain fudge. I make white chocolate/peppermint fudge, and peanut butter fudge, and coconut fudge, and fudge with Heath candy bar pieces...I think you get the idea. I was a little unsure of the peppermint fudge. I used those peppermint pieces that you put in cookies, but when I added it to the white chocolate...it turned PINK. Oh. My. Goodness. I thought it was ugly, but when I took it to work, it was finished first! Tasted like a chocolate covered candy cane. LOL I really wanted to try some pumpkin fudge, but ran out of white chocolate chips. I use a recipe that I've had for over 25 years. It hasn't let me down yet...super easy, uses big marshmallows, sugar, heaving whipping cream, butter, vanilla, and chips. That's it, just six items. I've added lots of goodies and never had a problem as long as I don't try to add too many chips.

Anyway, ready to take a shower and head to the craft corner. I started on a pretty punch needle pear piece. I'm almost finished and will post a picture in a few days. Be kind to one another.

Posted by Angela Tucker at 6:55 PM